Some Tanzania men on anti-retroviral (ARV) drugs have experienced abnormal breast enlargement similar to that of women. There are even cases where women taking the life prolonging drug against HIV complaining of queer side effects including becoming disabled.

Joseph Mkanda, 43, one of the victims, said he developed strange symptoms plus growing breasts after taking the drugs. Initially, he suspected the cause to be lack of a balanced diet. But he soon realised that the main problem was the type of drugs he was taking. 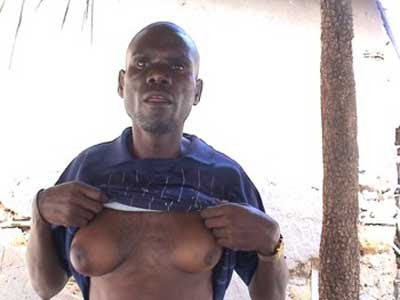 Maybe this isn't disturbing to any of the other brothas here but...

This is definitely an example of things going from bad to worse. I forsee this being a huge issue amongst black males regardless of whether or not they take an "AIDS medication". Look around your community at the emergence of metro-sexual (neutral or semi-gay) black adolescents. Are we really naive enough to think that our  reproductive ability would not be attacked by scientifically feminizing the BLACK MAN? Yall better wake up...

There is something or someone feminizing the children in Atlanta. There is a exuberant amount of young gay black boys in the Atlanta..I don't know what the hell is going on down here.